I haven’t seen a lot of information posted about how to do software updates with Shimano Dura Ace 9070 DI2. Here is a quick howto:

From there is pretty straightforward. The software will update itself and then detect if there are updates for firmware on the various components. Below are a series of screenshots. We all know what time of year it is in the USA, its indoor training time for much of the country. Most cyclists avoid using the trainer like the plague. Trainer sessions are usually very boring, and its very difficult to gauge your efforts. In the past people used TV or cycling training videos like Spinevervals to make trainer rides bearable, but even that didn’t help too much. When the Spinverval guy said do a 9/10 effort, what does that equate to for me? Even if you knew, it was easy to cheat yourself in a training session by just going slower. There was no real record of your efforts.

In the past two years a few products have come out that have transformed indoor training for me. The first product is TrainerRoad.com, which is a software tool that allows you to execute structured workouts and display real time performance data including an accurate estimate of power, even if you don’t have a power meter. TrainerRoad connects your computer to ANT+ devices via the Garmin ANT+ USB dongle. You can pick up a Garmin ANT+ stick for $25 on Amazon. It picks up the data from your heartrate monitor and ANT+ speed/cadence sensor.

If you have a powermeter it will pick that data up as well, or you can use the calculated power which is very accurate on the trainer. On real road rides, power calculation is notoriously inaccurate because there are multitude of variables that a power calculator cannot take into account, most notably factoring in wind resistance. There are less variables with an indoor trainer, when I go 20mph on my Cyclops trainer, TrainerRoad can make an accurate assessment than I’m pushing X amount of watts.

The Sufferfest is a great collection of downloadable videos which feature footage from protour races. Its way more entertaining than the old Spinverval or CTS vids of looking at people ride trainers. Plus TrainerRoad has complete integration with Sufferfest workouts. 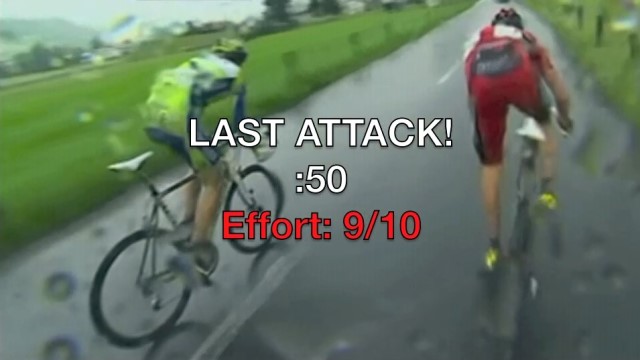 Strava has finally listened to some of my earlier gripes, and has introduced better power metrics and visualization tools. Once you complete a ride in TrainerRoad, you can export it to .TCX file which is importable via Strava.

Why is AppleTV on this list? People generally like to display TrainerRoad on a larger display such as TV. Dealing with cables and wires to share your screen can be a pain in the ass. AppleTV has a technology called Airplay Mirroring which allows you easily share your laptop screen and sound with your TV.

Like many avid cyclists, I’m a huge fan of Strava, the social training tool which keeps track of cycling performance via cycling computer data and phone applications. Strava has been around for a few years now. It started out as a pay service with limits on uploads for free users, but last year they introduced a “Premium” offering and removed the free upload limit.

The premium offering gave cyclists some addtional features. Probably the most notable was SufferScore, a feature which gives your ride a numberic score of effort based on a number of factors. There were also addtional power visualizations and the ability to sort leaderboards by weight.

Many loyal Strava users went for the premium offering just to show support for the service. The addtional features were not very compelling, but people wanted to support Strava. Its been over a year now, and premium users are starting to get disatified with the lack of updates. Sure, Strava has made enhancements to the service. Most notably, improvements to the mobile apps and a running offering as well.

The vast majority of premium users have a Garmin device making mobile enhancements irrelevant. When the premium offering was introduced, people assumed Strava would gradually add more training and analysis tools. As it stands now, Strava is a lot of fun but its not a serious training tool.

For serious cyclists, they have to use other software offerings in order to get detailed analysis of their rides. Training with power meters is becoming much more common, and Strava’s power analysis is extremely weak. You get a number for average power and some visualizations of power output over time. People who actually train with power meters are forced to use another service like Training Peaks in order to get any true insight into their training data. Strava doesn’t even provide the most basic functions such as power zones and normalized power metrics.

One thing that has differentiated Strava from other websites such as Mapmyride, Garmin Connect, and others is usability and good ascetic design. Strava has always looked really good, featuring beautiful icons and detailed maps. The source of Strava’s map data is Google maps. Google has changed the way map utilization is priced, making it a lot more expensive for a website like Strava to use Google maps.

Ironically, many people moved to Strava in late 2010 / early 2011 when Garmin Connect moved to Bing maps. Garmin didn’t do it for pricing reasons, it was a political move since Bing’s mapping provider is NAVTEQ, the same company which provides Garmin maps for their GPS units. Google is probably one of their biggest competitors since Android phones provide turn by turn directions for free.

Strava switched their production site to open street maps a few days ago. The only point where OSM map data is currently used are in the thumbnails users see in the activity feed.

Here is an example of what the old Google map thumbnail looks like: Contrast that view with a thumbnail from Strava with OSM maps: Notice the complete lack of detail? Its no surprise that the feedback to Strava has been overwhelmingly negative. Strava attempted to act like they were looking for community feedback for the decision to switch mapping providers, but its pretty clear that they were moving in the OSM direction long before the switch on the production website.

The lack of detail with thumbnails isn’t what is worrying most Strava users, its when they actually switch the ride view to OSM data. Garmin Connect switched away from Google maps, and users revolted. That is a 100% free service, Strava has many paying premium users like myself. The vast majority of Strava premium users pay just to support Strava, because the premium features are very underwhelming and haven’t changed much in over a year.

If Strava switches the ride view to OSM data, I can see the user community getting very upset. Once their is a certain expectation of quality, moving to an inferior alternative is never going to be stomached well by consumers. Ironically, the motivation for doing the map switch is cost cutting, yet Strava advertisements are plastered all over USA Tour de France coverage.

Since I started cycling a few years ago, I’ve really enjoyed the challenge of climbing hills. My home region of Northeastern Pennsylvania has some great climbs for the mid-Atlantic region.

Giant’s Despair is the most severe gradient I’ve ever ridden. Don’t let the 6% fool you, there are long sections of 20% make this the toughest climb I’ve ever ridden in PA. I would highly recommend compact gearing and big cassette.

Red Rock Mountain
Red Rock is a tough climb because there is simply no place to rest. Its a straight climb with a headwall averaging 15% for at least a mile.

Plymouth Mountain
Plymouth mountain is a convenient climb since its easily accessible from the greater Wilkes Barre area. Coming from the valley is a challenging climb that averages 9%.

Bunker Hill
Close to Plymouth Mountain is Bunker Hill, which is not as severe as Plymouth but a very enjoyable climb.